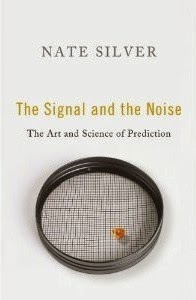 It was really interesting coming to this book soon after reading The Black Swan, as in some ways they cover similar ground – but take a very different approach. I ought to say straight away that this book is too long at a wrist-busting 534 pages, but on the whole it is much better than its rival. Where Black Swan is written in a highly self-indulgent fashion, telling us far too much about the author and really only containing one significant piece of information, Signal and Noise has much more content. (Strangely, the biggest omission is properly covering Taleb’s black swan concept.)
What we’re dealing with is a book about forecasting, randomness, probability and chance. You will find plenty about all the interesting stuff – weather forecasting, the stock market, climate change, political forecasts and more, and with the exception of one chapter which I will come back to in a moment it is very readable and well-written (though inevitably takes a long time to get through). It has one of the best explanations of Bayes’ theorem I’ve ever seen in a popular science book, and (properly to my mind) makes significant use of Bayesian statistics.
What’s not to like? Well, frankly, if you aren’t American, you might find it more than a trifle parochial. There is a huge section on baseball and predicting baseball results that is unlikely to mean anything to the vast majority of the world’s readers. I’m afraid I had to skip chunks of that. And there’s a bizarre chapter about terrorism. I have two problems with this. One is the fawning approach to Donald Rumsfeld. Nate Silver seems so thrilled Rumsfeld gives him an interview that he treats his every word as sheer gold. Unfortunately, he seems to miss that for much of the world, Rumsfeld is hardly highly regarded (that parochialism again).
There is also a moment where Silver falls for one of the traps he points out that it’s easy to succumb to in analyzing data. On one subject he cherry picks information to present the picture he wants. He contrasts the distribution of deaths in terrorist attacks in the US and Israel, pointing out that where the US numbers follow a rough power law, deaths in Israel tail off before 100 people killed in an incident, which he puts down to their approach to security. What he fails to point out is that this is also true of pretty well every European country, none of which have Israeli-style security.
I also couldn’t help point out one of the funniest typos I have ever seen. He quotes physicist Richard Rood as saying ‘At NASA, I finally realised that the definition of rocket science is using relatively simple psychics to solve complex problems.’ Love it Bring on the simple psychics.
Overall, despite a few issues it was a good read with a lot of meat on probability and forecasting and a good introduction to the basics of Bayesian statistics thrown in. Recommended.