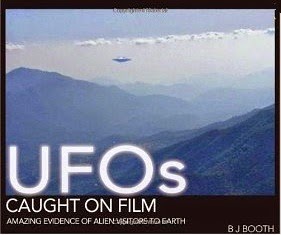 As a teenager I was fascinated by every weird and paranormal thing that you could watch a TV programme or read a book about. I revelled in Arthur C. Clarke’s Mysterious World. And though books on Borley Rectory probably made ghosts my all time favourite, they were closely followed by UFOs. What was not to love about spacecraft from another world?
There’s no doubt that back then I would have loved this smallish landscape format hardback stuffed full of UFO pictures or, as the subtitle puts it, ‘amazing evidence of alien visitors to Earth.’ As an adult, though, I have serious doubts.
I have no axe to grind about the existence of UFOs. I am sure they do exist in the sense of being unidentified flying objects, though I very much doubt that they are extra-terrestrial craft because of the impossibly large scale of the universe. Even if you did achieve faster than light drive, there is just so much of it, the chances of a backwater like ours being regularly visited is tiny. But I am afraid I found many of the comments in the book naïve in the extreme. I have no reason to believe that the author is deliberately deceiving the reader – and yet what he has written bears very little resemblance to logical analysis.
To a healthily sceptical eye, many of the pictures look to be fakes. Like many other people, I suspect, I went through a phase of mocking up flying saucer pictures in my teens. I didn’t do this for any personal gain – I never sent them to newspapers or published them in any way, I simply did it for the fun of it. I liked flying saucers. I used two techniques. Some were plastic models, suspended from near-invisible fishing line and sufficiently out of focus to conceal the fact they were models (today this would be even easier to do with modern photo editing techniques). Others were pictures of a metal hubcap, thrown into the air and photographed, spinning, in flight.
One of the problems with the hubcap technique is that it tended to fly, and so to be photographed, at an unnatural angle – yet time after time these “unexplained and inexplicable” shots in the book are of fuzzy, out of focus hubcap-like objects at the same kind of angle as I found so irritating when I tried to fake my pictures. Two others look just like old fashioned outdoor suspended electric lights with the cable either out of shot or retouched out of the image. Others look like nothing more than a clay pigeon, or a bird or the sun. It’s only the way the text describes the shape as having UFO-like characteristics that makes us see a flying saucer.
Worst of all, the book includes the “classic” photo of a collection of UFOs over the Capitol building in Washington. There is nothing in the text to suggest that this picture has long since been debunked. And yet if you take a look at the whole photo, rather than the cropped image in the book showing just the building’s dome and nearby sky, it is entirely obvious what has happened. The UFO formation is an identical mirroring of a formation of lights running along in front of the building. It’s nothing more than lens flare, absolutely, definitively. Yet there is not a word about this in the book.
I have no problem with a book leaving things open to the reader, but where there is evidence against a photograph it really ought to be presented. Without this, the book is more fan fiction than science fact. It was fun to see the photos and speculate as to how they were taken. I enjoyed the enthusiastic commentary. But this shouldn’t be taken as a persuasive document that UFOs are visitors from another world.
I did, incidentally wonder how what was primarily a picture book would hold up on the unformatted environment of Kindle so I downloaded the opening sample – I would say, if you want this book, definitely go for the physical version. The Kindle version just doesn’t do it justice.
Hardback: