Zero Degrees of Empathy [The Science of Evil] – Simon Baron-Cohen *** 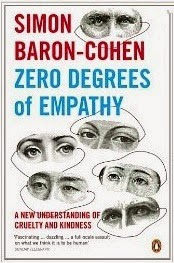 I’ve been a real fan of previous books by Simon Baron-Cohen like The Essential Difference, so opening this was one was a pleasant prospect. What I found was a book that wasn’t bad… but that could have been a lot better. I got the impression of a book that had been rushed out without a lot of work going into it.
The thesis at the heart of the book – that one of the important ‘circuits’ of the brain is the one dealing with empathy, and that individuals sit on an empathy spectrum, with some residing at zero degrees of empathy – is an interesting one. Baron-Cohen introduces us to three key personality types he defines as ‘zero-negative’ including psychopaths, plus types that are ‘zero-positive’ like those with Asperger’s.
In a way both of these definitions are odd, in that his zero-negatives can actually have a lot of the kind of empathy that involves being able to read another person’s emotional state, and his zero-negatives can have a lot of the kind of empathy involved in sympathising with someone else’s suffering. But this is certainly interesting stuff.
He also points out that empathy is important because arguably it is erosion of empathy that makes not only individuals do bad things, but states get into long term conflicts, like the situation in the Middle East.
And that’s great as far as it goes (though he offers no actual significant mechanisms for dealing with these empathy issues). But the whole thing does not read particularly well. The worst section is the one where Baron-Cohen describes the different areas of the brain that seem to be involved in the ‘empathy circuit’ (not by any means a single region) this is dull and an impenetrable list of acronyms with very little benefit to the reader. For the rest, there is a lack of feeling of context. We are given this assertion about empathy, and these people with zero empathy (except where they aren’t) without any way to make use of this information.
So, a disappointment. With a significant re-write, more context and more readability this would be the ‘valuable’ and ‘significant’ book the puffs on the back claim it to be, but as it stands it’s not quite there. Or am I just lacking empathy?