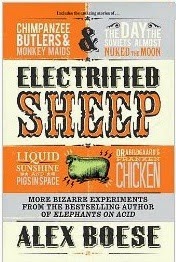 It’s difficult to read this title without thinking of Philip K. Dick’s story Do Androids Dream of Electric Sheep which was (very loosely) translated in the movie Blade Runner. Actually it’s difficult to read the title of this book at all because of strangely wordy cover. But what’s inside is not a freak show, but rather an exploration of some of the more bizarre experiments that scientists have in all honest decided to take on.
This is a field that is already covered by the igNobels (annual awards for real scientific papers that make you laugh and then make you think) and the Darwin Awards for people who do such stupid things they end up removing themselves from the gene pool. But Alex Boese treads a middle line of real scientific experiments – often major pieces of research – that sound mind boggling or just surely would never happen. But did. (Apart from nuking the Moon which ‘nearly happened’.)
If it wasn’t such an overused simile I’d say it was a roller coaster of a read – a very interesting mix of ups and downs, from the man who had an unhealthy relationship with a source of electricity to people who thought it would be educational to get two people to pretend to have a gun fight in the middle of a lecture. Not to mention the thousand tonne rocket propelled by hydrogen bombs that was genuinely worked on by American scientists at the end of the 1950s. It’s certainly an eye-opener!
Although the experience of reading the book was good, with an excellent mix of narrative and science fact, there were a couple of points I wasn’t so sure of. Each section started with a dramatisation of an event (Benjamin Franklin attempting to electrocute a turkey and instead shocking himself, for instance). These felt a little false, as if it were drama for the sake of it. And occasionally the author was perhaps a little loose with facts. He says, for example, that lightning is the biggest natural disaster killer worldwide – by most measures it comes in behind droughts and flooding/tsunamis at the very least.
Overall, though an excellent romp through some weird and wonderful scientists and their exploits that genuinely does both entertain and inform in equal measure.