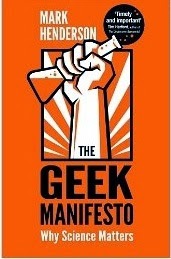 It’s interesting that the ‘added puff’ fake sticker on the front of this book calls it ‘important’ because that is actually a very informative word about this book. What is packed into ‘important’ is that this is a really essential topic with lots of well argued material… but it’s a bit boring. And that’s kind of how I felt about the book.
In a way it suffers from the target of my agent’s non-fiction mantra: ‘Is this a book or is it an article?’ I felt that this really was more an article taken to book length. But the problem is more than that and it sits at the heart of the issue that Mark Henderson is addressing. Talking about the politics of science can be rather boring. It’s a turn off. It’s quite easy to make science itself interesting if you are good writer, as Henderson indubitably is – but it’s very hard to make politics of science engaging.
I read a lot of science blogs – in fact I’ve met many of the people Henderson quotes  – and much though I love someone like Stephen Curry when he’s talking about science, when he gets on a politics of science rant I lose interest because I’m not professionally involved in science – and that same difficulty of engagement comes across here.
That said, this genuinely is a very important topic, and Henderson covers many aspects of it well. There were times (when he was talking about homeopathy, say, or the lack of science education amongst our politicians) I got highly involved. And even when it was a little more dull, it was indubitably worthy and necessary.
I guess what it comes down to is that this is, yes, an important book and you genuinely ought to read it. Just don’t expect it to be overwhelmingly thrilling along the way.
Incidentally I was slightly miffed he didn’t mention my book Ecologic, which covers many of the underlying issues he mentions on the environment and organic food in a very readable fashion (doubly miffed as we had the same editor) – but that has no influence on my review.