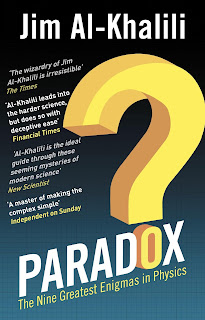 There is something wonderful about paradoxes – and when I give talks to people about physics, I find it’s the paradoxical bits, the ones that seriously bend your mind, that really get them going. That being the case, it’s a no-brainer that Jim Al-Khalili’s latest book is one to look out for. It’s rather unfortunate that he defines paradox incorrectly at the start, saying it is ‘a statement that leads to a circular and self-contradictory argument, or describes a situation that is logically impossible’ – no, that’s a fallacy. The OED defines a paradox as ‘a statement or tenet contrary to received opinion or belief, especially one that is difficult to believe’ – but there is no suggestion in the main definition that a paradox has to be logically impossible. And that’s why they’re such fun, because they challenge our beliefs, but they really can be true.
What we get is nine fascinating paradoxes of science (mostly physics), with an gentle introduction using the famous Monty Hall problem (also known as Ferraris and Goats) and one or two other paradoxes of probability. Each chapter is based around one of these chunky paradoxes, but Al-Khalili uses the theme to lead us through all sorts of interesting background, either because we need it to understand the paradox itself, or simply because it’s an opportunity to bring in some great material. So, for instance, we have the old infinite series paradox Achilles and the Tortoise as chapter 2, but we also discover the other known paradoxes of Zeno, including the delightful Arrow. Then there’s Olber’s Paradox – why is the night sky dark, Maxwell’s Demon – opening up all the wonders of entropy, The Pole in the Barn for the spatial aspect of special relativity, The Twins Paradox for the time aspect of special relativity, The Grandfather Paradox if you can do backwards time travel, Laplace’s Demon for determinism and chaos, Schrodinger’s Cat (oh, how I hate that cat) – explained better than I’ve ever seen it, and Fermi’s Paradox asking where all the aliens are. All in all, a great set, which uses these fascinating mind twisters to explore a lot of really interesting physics (and a spot of maths).
As is almost inevitably the case, there were one or two factual eyebrow-lifters. We are told, for example, that the Andromeda Galaxy contains 500 million stars – I think we’re talking hundreds of billions, not a mere half billion. And the explanation of Maxwell’s demon seems to suggest that flipping bits takes energy as opposed to the actual cause, which is erasure of information. But my only real problem with Paradox is that Al-Khalili writes like a physics professor (which he is), rather than like a science writer. His style can be a little plodding, and definitely patronising. So for instance the ‘explanation’ of the quantum Zeno effect is in essence to smile and tell us not to worry our little heads about it: ‘I don’t think I will pursue this line of thought in any more detail here, just in case you are nervously wondering what you’ve let yourself in for.’ In that case, why mention in in the first place?
Again I would contrast Al-Khalili’s suggestion that we leave thinking about quantum theory to the big boys: ‘However carefully it is explained to the non-physicist, quantum mechanics will sound utterly baffling, even far-fetched.’ with another physics professor, Richard Feynman: ‘It is my task to convince you not to turn away because you don’t understand it. You see, my physics students don’t understand it either. That is because I don’t understand it. Nobody does… The theory of quantum electrodynamics describes Nature as absurd from the point of view of common sense. And it agrees fully with experiment. So I hope you can accept Nature as She is – absurd.’ Feynman’s version is inclusive; Al-Khalili emphasizes that there are physicists and there is you, the common herd of readers. This is even rubbed in on the cover of the book. It’s not by Jim Al-Khalili, it’s by Professor Jim Al-Khalili – a bit like those dubious medical books where the author always has M. D. after their name.
Does the writing style spoil the content? Absolutely not. And I ought to stress that Paradox is by no means unreadable, just not in the professorial rank when it comes to science writing. The fact remains that the idea of building the book around paradoxes is great, the subject matter is excellent and the exploration of different aspects of physics is fascinating. This is a book that many popular science enthusiasts will lap up.