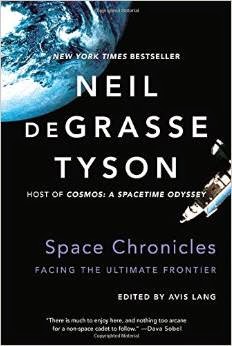 I really struggled with this book. I love space and space travel – I have lived through and been thrilled by the entire space race and the development of space science. I expected to love a book by a great astronomer and science populariser, but instead I pretty well had to give up, part way through.
There are two problems. The lesser one is the structure of the book. It consists of a collection of articles, interviews and such that Tyson has produced on the subject of space exploration. This inevitably means there is repetition. A lot of repetition. It’s not that what he is saying is not interesting, but after you’ve heard it for the tenth time it loses its novelty. Perhaps the most interesting thing is the way Tyson is so obviously pulled in two directions. On the one hand he appreciates how superior unmanned satellites and explorers are from a bang-per-buck science viewpoint. On the other hand he believes manned missions are essential to raise interest levels. But of course manned missions are very expensive and almost purely political/military in role, so he really does have to go through some entertaining gymnastics to defend them.
But the thing that made me give up was the sheer jingoism of the book. If you aren’t an American, I can guarantee this book will irritate you. Here’s one example, the words of an interviewer speaking to Tyson (who Tyson doesn’t argue with): ‘If we land on Mars, how are we going to know if USA is number one if an American astronaut is standing next to a French guy? Are we going to say, “Go Earth!”? No, we’re going to say, “Go USA!” Right?’ So basically international cooperation like CERN is a waste of time and money – all that’s important, all that space science is about, is knowing that USA is number one.
An even better example, as it is purely Tyson’s own remarks, is when he is talking about the aerospace industry, bemoaning the loss of US control. He says ‘In the fifties, sixties, seventies, part of the eighties, every plane that landed in your city was made in America. From Aerolineas Argentinas to Zambian Airways, everybody flew Boeings.’ I’m sorry? I worked for an airline in the 1970s, and I can tell you this is total baloney (which is apparently American for bilge). Remind me, for example, who built the Comet, the first jet airliner. Which American company? Oh, no, it was British. Of course Boeing was the biggest player in the period he describes, but there were plenty of others. (There were even a couple of other US manufacturers. Remember Lockheed?) Could I just point out also who made the only supersonic airliner flying back then. And come to think of it, the only one to fly ever since. The UK and France. And what did the US contribute to this amazing advance? They tied it up with red tape and objections so it was almost impossible to fly it.
This really made me angry, I’m afraid. In another article, Tyson tells off a judge for inaccuracy because he referred to 1,700 milligrams rather than 1.7 grams. Okay, it wasn’t a particularly sensible convention, but at least it wasn’t wrong. Saying ‘all airliners were (US) Boeings’ is just factual inaccuracy to put across your political position. A book on space travel must cover politics, but once it is so hugely politically biased towards one country, however significant it may have been to the aerospace business, it loses credibility. This isn’t a book about space science, it’s a rallying cry for Americans. That’s something that has its place. I’m not knocking America, and it’s good that Tyson is proud of his country. But a science book isn’t the place for such sentiments.