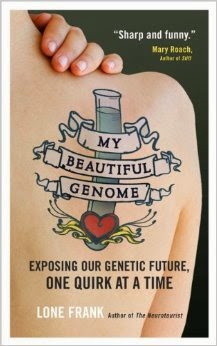 After getting over the nagging conviction that this was a book about a Galapagos tortoise (the author’s name, Lone Frank, is more than somewhat reminiscent of Lonesome George), I found this a fascinating exploration of a subject that is not going to go away – the influence of our genes on the way we are both medically and socially, looking at it as much from a commercial viewpoint as a scientific one.
In some ways the early promise of genetics has not delivered. After the initial idea that hoped that once you knew someone’s genome you could map out all kinds of illnesses, susceptibilities and personality traits, it turned out that things weren’t anywhere near as simple as first thought. Not only is it rare that a single gene acting alone is responsible for a particular trait, the whole business of epigenetics – genes being switched on and off during a person’s lifetime – makes it immensely difficult to draw straight conclusions from genetic information alone.
Nonetheless, companies offering genetic profiles for everything from susceptibility to medical conditions to romantic compatibility are springing up all over, and often doing well. In a very personal odyssey, Lone Frank tries out various tests and talks to many experts about what is sure, what is probabilistic and what is a distant pipe dream. She encounters everything from a man who believes it is a simple logical choice to have a double mastectomy if you have a gene combination that makes breast cancer more likely to a scientist who points out that in some ways eugenics is live and well in modern medicine.
There is no doubt that this is a very personal and informal exploration of an important and sometimes quite complex subject. Frank brings out some really thought-provoking issues, concerns and positive possibilities for the future. Unfortunately, though, the style also has its downside. One of her chapters begins: ‘What is the most interesting subject in the world? For all of us, it’s the same thing – ourselves. Me.’ This is so true, and there are occasions when the book is just too much about the author, not about the reader. The other slight problem is that the approach is inevitably rather rambling. Although it is interesting following the process by which she gathers her information (and also it’s cleverly written to make this approachable), the fact is that I’d like just a bit less about the process of interviewing people and a bit more of the content of the interviews.
That slight concern, which makes the book more of a chore to read than either its content or the excellent writing should, isn’t enough to put me off My Beautiful Genome, though. This is a subject we all should know more about, and Frank’s light style and storytelling verve is more than enough to get over any doubts to make this an enjoyable read.