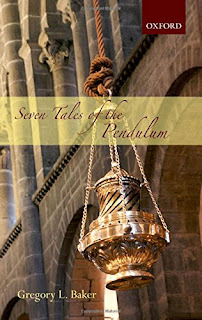 There was a time when practically every review we published of an OUP popular science book had the same complaint. What we were forced to say again and again was that this was a book with a great idea, an excellent topic, and an expert writing it. But unfortunately that expert was an academic who didn’t have a clue how to write for the general public and the result was unreadable. In the last year or so, however, things have changed. OUP has come out with a good number of titles (e.g. The Many Worlds of Hugh Everett III) which have been surprisingly readable. Unfortunately, this title is a return to form. It’s a wonderful subject. It has a neat concept in the ‘seven tales’. It’s written by an expert. But it is practically impenetrable.
Things don’t start awfully well in the introduction, when Gregory L. Baker is a little condescending about producing a version of his ‘real’ book for the common herd. But he also reassures us ‘Readers may rest easy knowing that I am mindful of the warning made famous by Stephen Hawking, that every formula reduces the readership by a factor of two.’ The problem is, although it sold well, Hawking’s book has a reputation for being difficult. Yet it is vastly easier to read than this one.
This limitation is frustrating, because Baker does pack in lots of interesting stuff about pendulums. Whether it’s the basic surprise that (despite Galileo), on the whole an ordinary pendulum’s timing isn’t independent of swing size, or explorations of Foucault’s pendulum, torsion pendulums, swinging censors in cathedrals and even the Pit and the Pendulum, there is some excellent material to cover. But the writing is rarely approachable and the author simply misses the whole idea of how to write for a general audience. This is much more the sort of writing you’d find in an undergraduate physics textbook.
I opened a page at random and had a choice of at least four quotes to demonstrate this. Here’s one of them: ‘A sophisticated mathematical procedure may be used to calculate the fractal dimension for the Poincaré section of the chaotic pendulum. But our intuition can at least help demystify the result. Close examination of the Poincaré section shows that its points do not cover an area, but are really a (possibly infinite) set of closely spaced lines. Therefore the Poincaré section is more than a line and less than an area. We then expect its dimension to like between one and two. For the parameter set A(Forcing)=1.5, Q (friction)=4, ωD(forcing frequency)=0.66 the fractal dimension is found to be 1.3. In fact, it is generally true that Poincaré sections for chaotic systems have noninteger dimensions.’ That’s all right then.
The other potential quotes were more dense and impenetrable. You might excuse this because some of the terms have been explained earlier, but the problem is that the approach assumes the way to write popular science is to take a textbook and take out the maths, leaving the explanatory parts, rather than starting from scratch and putting things in terms that people will understand.
Overall, then, a useful and interesting book for physics students who want to find out more about pendulums without doing the maths, but not for the general reader.