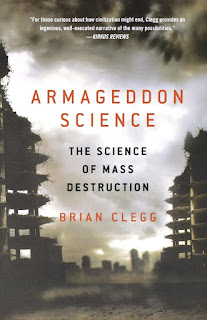 Initially, I thought that this book might be a lot like one I read a long time ago: Isaac Asimov’s Choice of Catastrophes. However, although Asimov and Clegg overlap very slightly – for example, when Asimov looks at infectious diseases and atomic bombs – Clegg’s whole focus is on how man could bring about the destruction of himself, rather than on how the Earth itself could meet its end. For example, one of Clegg’s most compelling and worrying chapters focuses on how we’re all doing our part to bring about climate change (the term Global Warming was first coined half a dozen years after Asmiov’s book appeared); whilst another looks at information meltdown (Asimov died a year or so before the Internet and the World Wide Web started in any real sense).
There’s another link to Asimov though: A good writer must also be a good investigator – and Clegg is a very good writer – and that’s what is so persuasive about this book: it’s meticulously researched, requiring painstaking inquiry, analysis and detective work, and it’s in Clegg’s metadata, asides, interpositions, excursions – call them what you will – where he adds so much more (and with apparent ease). For example, do you know why the Japanese threw porcelain pots out of their aircraft, or why anti-atoms won’t stay put?
Despite its rather depressing subject matter, I loved this book; and I’m sure you will too.