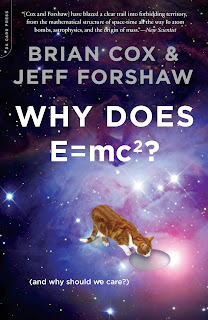 Brian Cox is a dream for any publisher (sorry, Jeff Forshaw, but we haven’t heard of you). The media’s darling physicist at the moment, Cox is sometimes described as the popstar physicist, partly because he looks like one, but even more remarkably, because he was one. Although now Professor of Particle Physics at Manchester University (though confusingly, according to the bumf, he lives in London – that’s quite a commute), he was once part of the band D:Ream. He’s also a nice guy – I’ve done couple of gigs with him (speaking engagements, not music), and though a little over-enthusiastic about the movie world at the time, he was very friendly.
You might expect, with Cox on board, that this would follow the approach of TV science – lots of ‘gee, wow, amazing!’ but light on nuts and bolts science. But not a bit of it. In fact, if Cox and Forshaw had taken the same advice about equations as Stephen Hawking, the chances are they would have expected to have around 2 readers.
This is primarily a book about the origins of the world’s most famous equation, but rather than just give fun background, some special relativity and some handwaving, this pair plunge in and really do explain how E=mc2 is derived, something that isn’t generally done in popular science because, frankly, it’s pretty hard going. They don’t stop there either. They go into the master equation of the standard model of particle physics, explaining how it is derived from gauge symmetry, exploring the different components of the equation and giving by far the best explanation of the Higgs field/Higgs boson that I have ever seen. In this, the book is absolutely masterful.
What I was a little disappointed with, having heard Cox’s eloquent speaking, is the rather stiff writing style. Although it tries to be friendly, I felt a bit like I was… well, being talked to by a couple of professors. There’s a lovely example of this where they quote Kurt Mendelssohn’s book on Lavoisier’s widow where she is said to have led Count Rumford “a hell of a life.” Cox and Forshaw then comment: ‘the book was written in 1966, hence the quaint turn of phrase.’) You can almost see the pursed professorial lips.
I loved this book, which perhaps makes it rather surprising that I only gave it four stars. If you’ve at least a physics A level and are about to set out on a physics degree (or, like me, you’ve got a rusty physics degree), it’s phrased at just the right level. But I felt it would be hard going for a general reader without that background. I had to re-read several bits to be sure what the writers intended, and in the end there’s a reason most popular science books don’t have this level of technical detail.
So, not quite the perfect popular science book, yet certainly one of 2009’s gems.