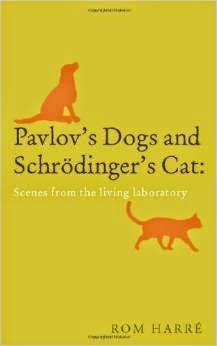 Sometimes the subject of a book suggests itself immediately to the writer, but at others you struggle to find a hook to hang it on. This has a feeling of a book with a manufactured hook – subtitled scenes from the living laboratory, it’s about the rather contrived concept of experiments involving living things – but not in the sense of experiments on living things, but rather those where the living things (animals or plants) act as an instrument or apparatus.
The opening chapter is intensely dull, and I urge you to skip through it as quickly as possible – once Rom Harré gets onto actual examples, his writing style lightens up a bit. While never more than pedestrian, it at least ceases to put you to sleep every few lines.
Each of the chapters then looks at a different way that living things have been used as experimental instruments or equipment. Some of these are quite indirect, such as the use of the remains of ancient creatures in sediment to study the temperature of the period – others are all too direct. Readers with a squeamish disposition may find themselves skipping over some of the chapter on blood circulation, for instance. Similarly, though we tend to remember Pavlov for his salivating dogs, he got his Nobel prize for, and we see much more here of, the way he reassembled the innards of dogs to be able to study what was happening in the digestive processes from the outside. (In Pavlov’s defence, he did then try to fix the dogs, rather than just killing them).
Harré intentionally avoids any moral consideration of whether it is right to experiment on animals, and whether an experiment needs to have a certain potential for payback before it’s justified – probably rightly he argues this is mostly outside the scope of the book, though he does occasionally touch on it, particularly in and end note. Before this comes a chapter on Schrödinger’s cat, which is on the use of animals in thought experiments, and on Dawkin’s pseudo evolutionary electronic ‘lifeforms’. Unfortunately, Harré’s explanation of the quantum physics is not the best, so this chapter isn’t great.
Overall, it’s not a bad effort. Harré does try to give some feel for the people involved as well as their work, and this is probably where the book is most effective, but it remains too dry and struggles too hard to justify itself.