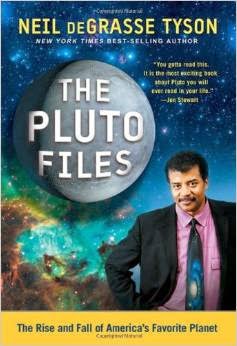 There’s something not right feeling about the assertion in the subtitle of this book that Pluto is ‘America’s favorite planet’. It may be true, as astronomer Neil deGrasse Tyson suggests, that Pluto is the children’s favourite because of the association with the Disney character of the same name, but I find it hard to believe that, as he suggests, it’s America’s favourite because it was discovered by an American (even if it was named by British eleven-year-old girl). I doubt if many people know this to be the case, and my suspicion is that Mars, Jupiter and Saturn would all be more popular if properly assessed. Mind you, I have real doubts about Mr Tyson’s ability to judge people, when he says ‘among all planet names… Pluto sounds the most like the punch line to a hilarious joke.’ Is this really an astronomer who has never heard a Uranus joke?
This is a fairly lighthearted book, a compendium of items about Pluto from a man who was apparently vilified as one of the early astronomers to demote Pluto from being a true planet. Personally I really can’t see what all the fuss is about – but a lot of people do, and Tyson brings this out neatly, starting with the pop culture associations of Pluto, going onto the details of its discovery, what little science there can be for such an uninteresting lump of real estate, and concluding with a long, breathless section on the de-planetization of Pluto.
The problem with this book is that the subject is, at best, quite interesting. That Tyson struggles to keep the attention reflects more about the subject matter than the writer. It doesn’t help that the book format is neither one thing nor another. At times it feels like a kids’ picture book – one of those books with fake pasted in documents and spy-type grid patterns. At others it’s more of a straight text excursion.
If you’re a solar system fan, this is a book you ought to have, without a doubt. It’s a great book on Pluto. The only question is whether most of want a great book on Pluto.