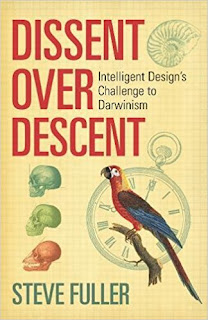 I was delighted when this book thumped down on the ever-growing review pile, as its timing couldn’t have been better. I had just started a short series of posts on my blog covering the debate between intelligent design and evolution. As someone had kindly sent me some material on intelligent design, I wanted to take a step back from my prejudices and try to take an open-minded view purely on the facts as they were presented from both sides of the argument.

As this book is subtitle ‘intelligent design’s challenge to darwinism’ I thought I had the ideal prompt for my summing up (though I was a little concerned by that word ‘darwinism’ which only tends to be used by creationists as a kind of insult to evolution to force it into a similar position to a belief system).

Unfortunately, after reading the book I was really no more the wiser. I am told Steve Fuller is a sociologist of science (whatever that is), but the book comes across as philosophy of science of the dullest kind. It is almost as if the author sets out to put the reader to sleep, the approach is so unhelpful to understanding what is being said.

Furthermore, as often seems to be the case where there is an element of post-modernism about a piece of writing, it is almost impossible to be sure just what conclusions one is supposed to draw from reading this book. I think, but I’m not all sure, that the author’s conclusion is that both intelligent design and evolution are science, in that they try to offer an explanation for the existence of something, but that they are both bad science, because neither can offer any useful predictions about a specific species etc. So I got nothing useful here, apart from reinforcing my prejudices about philosophy of science – but that’s a whole new debate which I will leave to another day.

All in all, a huge disappointment.